Steven writes. He wants to do it for a living. He’s married and has two dogs. 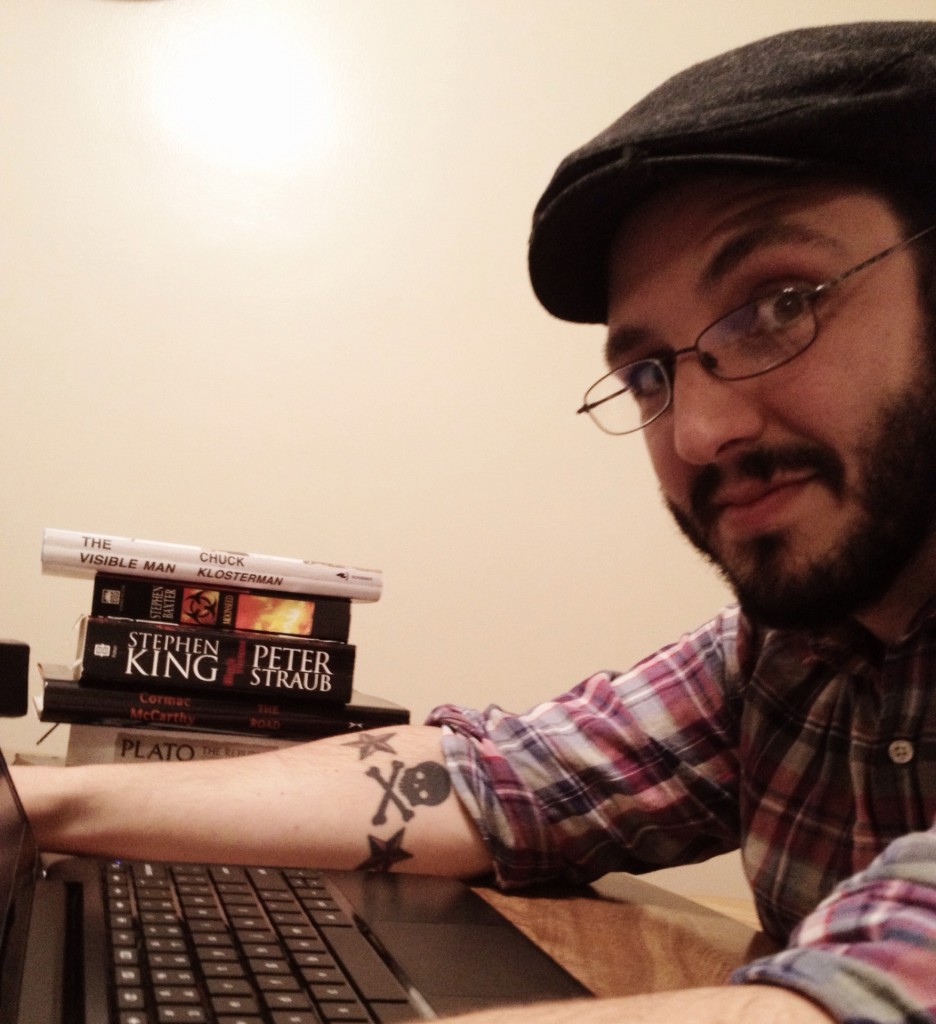 I don’t always write, but when I do, it’s with a pile of books next to me.

Steven Domingues was born in Santa Maria, California. He attended Santa Maria High School and moved the hell out of there at his earliest convenience. He moved down to Oxnard, Ca and went to school at ITT Tech. Thinking that if he went into a four year school, he’d end up wasting time and money, Steven opted for a degree in Computer Aided Drafting and Design. He got his first “real” job halfway through school, and after he graduated, he went looking elsewhere. Fresno!

It was during this period that Steven first attempted writing for recreation. He thought of a character, a setting, and a mood. Then he wrote. He’d try to get in 10 pages a day. After about 450 pages, he lost steam and put the story down for a while. Unfortunately, when he tried to pick it up again, he found that the disk he had been using to save his work had been corrupted. Using some recovery software, he was able to save about 400 pages of work, un-formatted. He took some time to re-format, but couldn’t bring himself to re-write the 50 lost pages.

Steven worked for a civil engineering firm during this time, until he was laid off in 2009. Trying his best to stay in the workforce, he got another job as quickly as he could. Back in Santa Maria. Que the sad music.

It was this point, after working at a job he loathed, Steven turned again to the creativity that was bubbling beneath the surface. In his spare time, he wrote what would become “Chaos and Kay-Awes“. Inspired at finally finishing something, he started several other short stories, novellas and little bits of writing ideas.

Luckily, he was laid off again, this time after only 7 months. It would be another year until he found employment again. In the mean time, he wrote. He had many ideas, and threw them all down on the keyboard. He slowly made a routine of waking up, exercising, watching t.v., walking his dogs, and then writing until his girlfriend of 10 years was off of work.

He finished another story “The Deckard Job” and continued to write. He proposed to his longtime girlfriend and they moved to Arroyo Grande, CA. His next obsession, while wedding planning, was with a time travel story called “The Wormhole” and was the first story he attempted to write in first person.

In August, 2010, Steven again found employment, but in Paso Robles. He and his new bride moved to San Luis Obispo, CA. In an attempt to jump start writing again, Steven took part in the Clarion Write-a-thon, and kept track of his progress on his tumblr site (which also has several pictures of his dogs, Charlie and Annabel). The story written for the write-a-thon started off as another short story or novella, but as he continued to write, he found that there was a longer story to tell. He has finished writing “Win Some, Lose Some” the third story with the Daphne Kay character.

After moving yet again (this time after purchasing a house in Atascadero, CA with his lovely wife) he’s now in the process of acquiring an agent (no easy feat) while writing his next novel “Universal Constant” as well as various other short stories and such.

Which brings us to now. He decided he needed a website, and now he’s writing the biography page, which is a little weird because he’s writing it as if it’s someone else.